May introducing its products to large chinese companies


Sampat Liyanage, Export Sales Director of MAY, introduced the brands RICHARD and Coffesso to large Chinese companies. The presentation was arranged during a visit of a delegation of the Government of the Moscow region to Guangzhou.

Developing the strong brands and widening the export expansion are the major strategic lines of the company until 2025. China is one of the most mature markets in the tea segment and a promising partner for MAY. Sampat Liyanage discussed with Guangdong officials the prospects for promotion of products of enterprises from the Moscow region in China, particularly, tea and coffee produced at Maykompleks.

The Russian delegation was headed by Anton Loginov, Deputy Minister for Investments and Innovations in the Moscow region. He introduced producers from the Moscow region and suggested to taste their products.

Chen Yuehua, Deputy Director-General of the Department of Commerce of Guangdong, mentioned that many product types, such as tea RICHARD and coffee Coffesso, could successfully enter the Chinese market, owing to their supreme quality, great taste and attractive packing design. Representatives of Chinese companies expressed their willingness to co-operate with MAY. 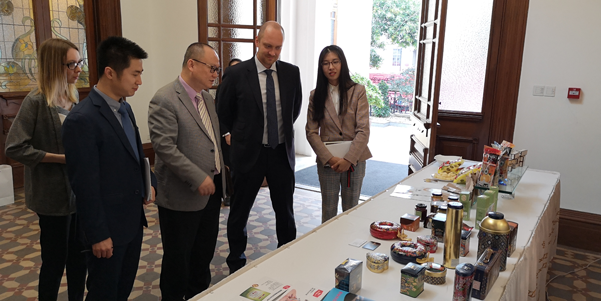